This article is my memo for creating a comfortable development environment with Unity + VSCode.

For Unity, install the stable version (LTS) unless you have a specific reason not to.

VSCode can also be downloaded and installed from the following link.

It can also be installed from package management tools such as Chocolatey.

From the left side of the Preferences window, set External Tools -> External Script Editor to Set it to Visual Studio Code.

Open the contents of the Unity project in VSCode.

Open the current Unity project with VSCode. Assets -> Open C# Projec to open it in VS Code. 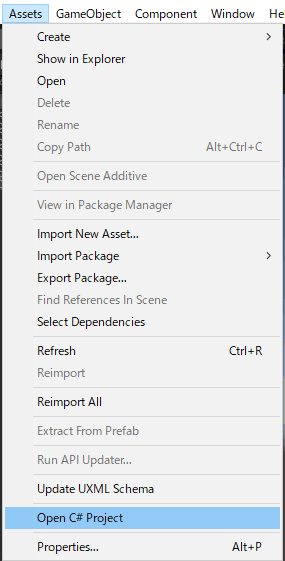 To make the development process more efficient, the following extension plug-ins should be installed.

The following are the extension plugins that I installed for VSCode.

All of them can be installed immediately as plug-ins from "Extensions" of VSCode.

Below is a brief description of the main points of each extension plug-in.

NET Core or Mono, it will be able to support C# coding running on .

NET Core or Mono. You can use Ctrl+Space to complete the following in pre-written code.

Using .NET Framework in VSCode Although not directly related to Unity, VSCode is not suitable for development using the old-fashioned Windows Native features . （NET Framework (although it's not impossible). NET Framework, it is better to use Microsoft Visual Studio Community instead of VSCode, as it has better code completion and debugging for related libraries.

It is possible to place breakpoints in the code on VSCode (a useful feature to temporarily stop execution and check the contents of variables, etc.).

You can put a breakpoint by left-mouse clicking on the left side of where you want to stop in the code.

You can run Unity, stop at the line of the breakpoint, and see what happens to the contents of the variable a.

In order to actually stop at a breakpoint, we need to specify from VSCode which Unity Editor we want to associate with it.

If you have more than one Unity Editor running, you will see a selection.

When the debugger is connected to the Unity Editor, the following information for debugging will be displayed on VSCode. 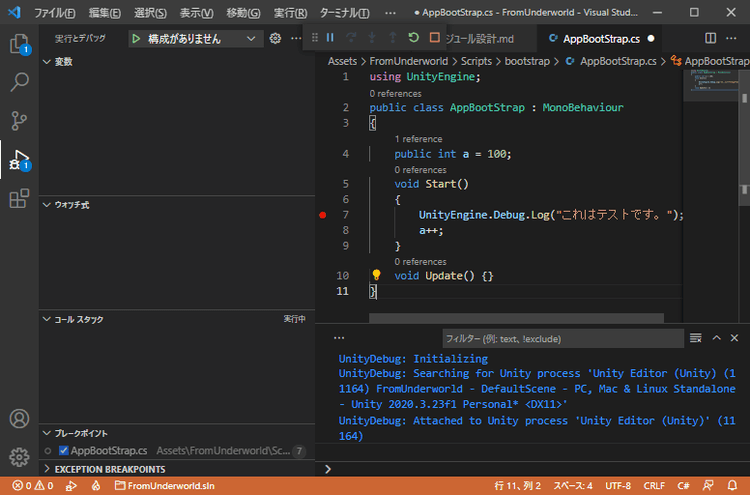 You can also debug on the Unity side! message will be displayed. 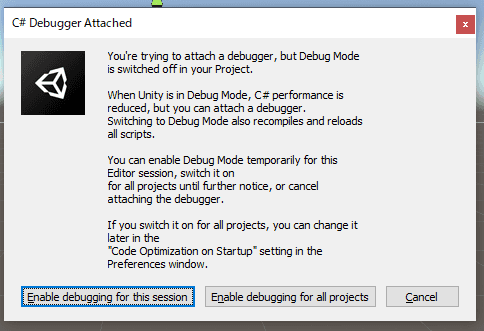 The actual way to put breakpoints and debug is omitted(maybe another article).

For Unity related libraries, you will be able to use templating code that need to be created in a standardized way.

For example, if you create a new .cs script and type Mono, "MonoBehaviour" will appear in the code completion list, as shown below.

If you complete the code in this state, you will see

In addition to this, you can also use the If you type "Start" in a class that inherits from MonoBehaviour, it will generate the necessary template-like methods as shown below.

You can also use the completion function to generate the code for Unity's log output, which is often used.

When commenting in C# coding, it completes the required template.

It will automatically generate a comment insertion template as follows.

This is so useful!

It will also generate the necessary comment templates for the methods. If you type "///" just before a code like the following

It will also generate templates with arguments and return values as shown below. 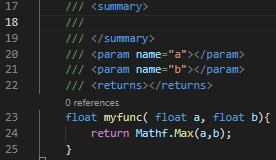 If the code does not complete properly, please refer to the following article, which may help!