I'm sure there are many other benefits, but these are the ones I feel are worth mentioning.

UTF is based on NUnit, which is a testing framework for.

In Unity 2019.2 and later versions, UTF must be installed in your project as a separate package in order to use it. However, in Unity 2020.3 LTS, it was already installed in the template that I selected when creating the project from the Unity HUB. (Maybe some templates do not include it?).

Let's see if UTF is available in your environment. In the Unity menu, select Window -> Package Manager and click 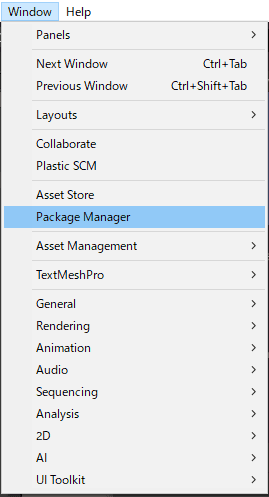 If it already has a green check mark, it is already installed. If not, you can install it with the Install button.

You can run the test in Edit Mode, which is the mode in which you are editing the Unity Editor. This is useful because you don't have to run the game every time you want to run a test.

This mode allows you to run tests based on the state of the game when the project is played (run). If you add the [UnityTest] attribute, the test code will be executed as a coroutine.

How to run a test in Edit Mode

First, let's display the window to run the tests and view the list. 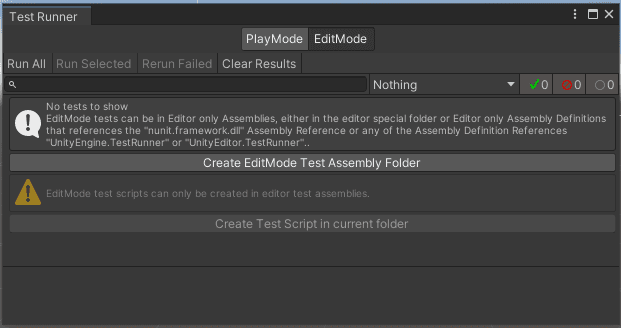 Pressing the Create EditMode Test Assembly Folder button will create a folder for creating test code in the location currently open in the project.

In this "Tests" folder, a file with the extension asmdef is created by default, Tests.asmdef. This is called the assembly definition file and describes the configuration of a feature called Assembly Definition (or adf for short) in Unity, where you can define the dependencies of your tests on assemblies to make the minimum necessary DLL calls.

In the assembly definition file (asmdef file), you need to add references to the assemblies that are required to run the tests. Also, if the test mode is Edit Mode, the test script under this folder should be set to run in Edit Mode.

When you select the asmdef file in the Unity Editor, the inspector will display You can set the assembly and execution platform to be referenced by the test code. 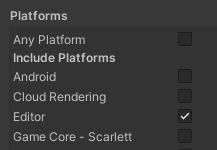 Check the Editor checkbox. (I think it's on by default)

Next, let's create the test code.

A new file NewTestScript.cs will be generated. Rename it appropriately.

The content of the code is as follows by default.

These two methods are the test codes, and you can check and run them from the list on the Test Runner window. 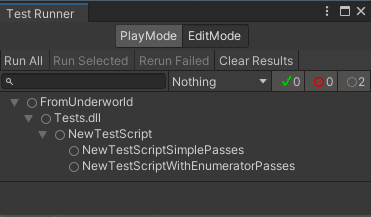 Right-click on the test you want to run in the window -> RUN You can run the test by selecting RUN.

As a result, a green check will appear, indicating that the test was successful. 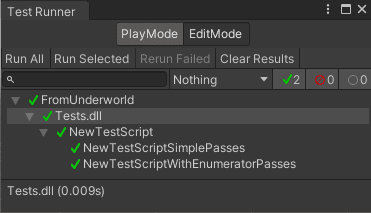 You can also run all the test code by clicking Run All at the top of the window.

Let's try to write a normal NUnit code that can be used for C# development regardless of Unity.

For reference, we will create two tests with the [Test] Attribute.

You can run them in both Edit Mode and Play Mode.

When you run it, you will see that the test case for Test2_Equal has failed.

You can use the following NUnit 3.0 Assert for your test code.

Here is an example.

Assert Function of NUnit 2 (Classic Model) You can still use the validation code for tests using the Assert feature (Classic Model) of NUnit 2, but the new NUnit feature is simpler to write tests with, and the new features are not (for backward compatibility?) applicable in the future. However, since the new NUnit features are simple to write tests with and the new features (due to backward compatibility?) will not be applied in the future when writing with the Classic Model, the official recommendation seems to be to write NUnit 3~.
For a list of the features of NUnit's Classic Model Assertions, click here (nunit.org official)](https://docs.nunit.org/articles/nunit/writing-tests/assertions/assertion-models/classic.html).

Let's try to select a failed case in Test Runner. 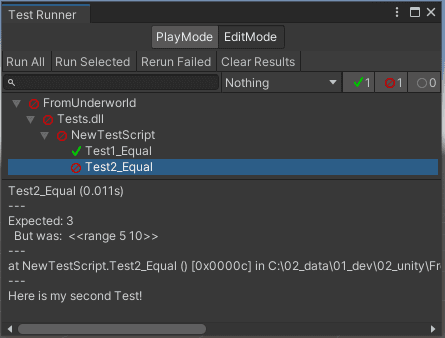 If we click on the Test2_Equals test case to check it, we see That` outputs the contents of the comparison that failed.

You can also see the contents of Debug.Log written in the test case here.

How to write Nunit3

This section describes how to write constraints (Constraint) that are often used.

Reference to other modules from test code in Edit Mode and Play Mode.

For example, when checking functionality in another script from Edit Mode, you may not be able to reference (or resolve) the class properly. (The same applies to Play Mode tests)

For example, your game's Asset folder has the following folder structure and you want to test "CommonUtil.cs".

Assume that Script dir contains the various scripts used in the game project. We will create a new assembly definition file directly under Script.

From the inspector of the PlayTestAssembly.asmdef you created for testing, click From the + button in Assembly Definition References.

Add the Assembly Definition that you just created under Script.

Now you can refer to the classes under the Script folder of your project from your test code.

We will check the flow of testing for the state of the game when it is run.

Suppose you have the following project structure.

The Bomb prefab has the script "BombBehavior.cs" attached to it, and It will explode after some time! It is assumed to be a simple one. This time, we will test the behavior of BombBehavior.cs.

Create a Tests folder directly under the project for confirmation. (You can put it anywhere you like.)

Once the Test Runner window is open, select PlayMode and click Select Create PlayMode Test Assembly Folder, with the "Tests" folder selected from the project. 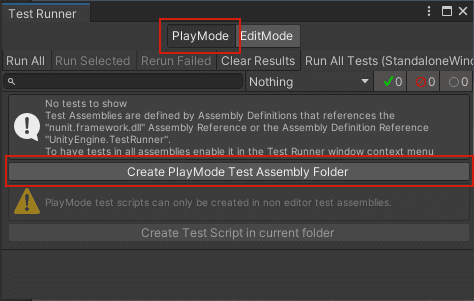 A new folder "Tests/Tests" will be created, and we renamed it to "Tests/PlayTests".

We want to test the contents of the "BombBehavior.cs" script under the Script folder. Create an assembly definition under Script folder so that we can refer to it in our test code.

Right-click the Script folder -> Create -> Assembly Definition to create a new assembly definition file. (See the section "Reference to other modules from test code in Edit Mode and Play Mode" in this article.)

Open the inspector of "PlayTests.asmdef" and add "MyGameAssembly.asmdef" directly under Script to "Assembly Definitiono Reference".

Then, in the PlayTests folder, create "SamplePlayTest.cs" to write the test code.

I wrote the following code.

The method BombTimer_Success in this test code creates a prefab of Prehabs/Bomb in the test scene and checks its behavior.

The Bomb prefab will explode in 3 seconds, and you can check if it is exploding or not with the isExploded() method, True/False.

Now you can test from TestRunner, just like in Edit Mode.

When you run it, the test scene will start up and you will see the results after a while.

The test code is called as a coroutine, and the behavior is checked before and after 5 seconds have passed.